We all have a bubble around us, a sense of personal space we don’t like to have invaded. How close are you happy to stand next to a friend? A stranger? And how is your comfort zone influenced by your nationality? 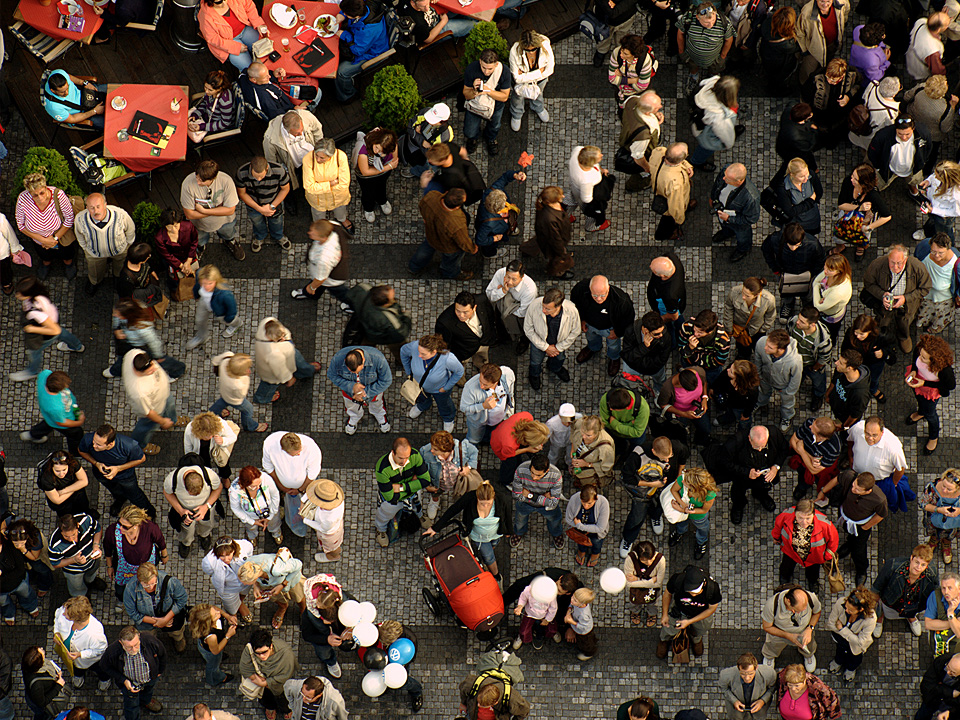 Remember Elaine’s ‘close talker’ boyfriend on Seinfeld, who stood too close? So close that Kramer fell over trying to get away?

Most of us have experienced meeting someone who just doesn’t seem to get personal space. It’s an icky feeling to have someone insist on standing too close. Especially when your backwards shuffle simply results in them stepping forward to close the gap.

Psychologists have been studying personal space since the 1960s, and we know quite a lot about it. You can think of personal space as the area around your body that you consider being psychologically yours. One study in the 1970s observed how long it took men to start peeing depending on how close the nearest occupied urinal was.

But personal space is an immensely variable thing. It changes, depending on where you are and who you’re with. Most of us will put up with standing much closer to a stranger on a crowded train than we would at other times.

In 1963, Edward T. Hall defined four ‘bubbles’ each of us perceives. Our intimate bubble (15 – 45 cm) is reserved for family, pets and closest friends. Next is our personal space (45 cm – 1.2 m), for friends and acquaintances. But we feel very uncomfortable if a stranger enters that zone. Then there’s social space (1.2 m – 3.6 m), fine for both new acquaintances and strangers. Finally, we all have a sense of public space, shared by all.

But this was a study of white American men. And it turns out where you’re from affects your preferred personal space.

Personal space around the world

In a study published earlier this year, researchers asked almost 9000 people from 42 countries to say how close they would be comfortable standing to a stranger, an acquaintance and a close friend.

Within each country, women and the elderly needed more space to be comfortable. But there were striking patterns across nationalities. Of the 42 countries included, Romanians had the largest personal space and Argentina the smallest. In Romania, people preferred to be almost a metre and a half from strangers, whereas Argentinians were happy to be about 80 cm from a stranger.

The researchers suggest this is because warm weather makes us feel socially closer. Beer garden, anyone? (Their alternate theory was that people living in warmer climates would stay well away from other people to reduce the risk of sharing parasites).

Interestingly, Romanians were very happy to be close to an intimate friend (50 cm). And Norwegians like to be even closer: 40 cm from a close friend. Maybe cold weather prompts us to want to get cozy with our nearest and dearest.

Unfortunately, Australians weren’t part of the study, but both England and the USA came out somewhere in the middle of the 42 countries, with Americans being happier to stand a bit closer to others than the Brits.

In monkeys, the area of the brain called the amygdala is involved in a sense of personal space. The amygdala plays an important role in memory, decision making and in our emotions.

Nearly a decade ago scientists determined the amygdala also plays a strong role in human perceptions of personal space. They worked it out by studying a patient known as ‘SM’, also known as the ‘woman with no fear.’

SM suffered major damage to the amygdala on both sides of her brain and can’t easily recognise the expression of fear in other peoples’ faces or judge the trustworthiness of other people. She also virtually never experiences fear herself. Scientists discovered SM felt comfortable standing just over 30cm from another person and it didn’t matter how well she knew the person.

Standing nose-to-nose with someone, even a stranger, didn’t make her uncomfortable. On average, other people in the study preferred to be just over 60cm from others. Experiments showed just the idea of someone standing close by is enough to make our amygdala fire up.

But next time you’re travelling, perhaps you can challenge your amygdala and do some experiments. Especially if you happen to be in one of the many countries not included in the study. Let’s fill the gaps.